Bob Hawke on the road again and doing it well 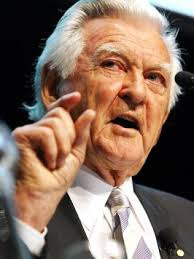 You would only trust about Tony this much.
He's already said, only believe what he says it if it's written down.

The former Labor prime minister used his appearance at a campaign launch in Melbourne's marginal seat of Deakin on Friday to unleash the brutal assessment of Tony Abbott.
"What's the bugger going to say next?" Mr Hawke said, leading the laughter of dozens of Labor supporters in the crammed campaign office.
"He's going to talk a hell of a lot in this campaign but he's wasting his time.
"He's already said 'Don't believe me, it's only what I write'."

Mr Hawke had a few choice words for the coalition's asylum seeker policy.
"It's stupid ... he knows that to get up and say he'll send all the boats back, there's a word for that, and it's bullshit," Mr Hawke said of Mr Abbott's plan.
But it's nothing personal, he said.
"I like him personally but I think he's as mad as a cut snake," was the none-too-subtle assessment.
at July 24, 2010