Who is Netanyahu, what is his real position, he's a joke.

The prime minister Netanyahu has vowed to participate in U.S.-sponsored peace talks with Palestinian leader Mahmoud Abbas that aim at leading to the creation of a Palestinian state within a year.
However if he can't control his own Foreign Minister he hasn't the power to negotiate anything.
The US is caught between a rock and a hard place, they have to deal with Netanyahu who is a toothless tiger.
At the same time the Israeli lobby in the US is dead against any deal unless it does exactly what Liberman wants.
Citing the "utter lack of confidence between Israelis and Palestinians," Liberman told the U.N. that any durable solution in the Middle East, would require the separation of populations, in this case Israelis and Arabs.

He believes the Palestinian and Arab population who live live in Israel should be in a separate state, therefore leaving Israel to the Jews.
Is this some form of racism in disguise.
The Israeli's are the people the world took to heart after WWII because of the horrendous treatment by  Germany.
Now a certain percentage of these people are locking up an entire race of other people, and their hatred for them is equal to that which was shown to them during the war.
The Jewish religion is one of the great religions of the world and it is being fraudulently used to gain riches and alienate people and deny human rites.
Israel's government will not extend the moratorium, as President Obama requested because it could upend Netanyahu's fragile coalition government.
The reputation of Israel is at stake, we saw the sheer arrogance of Israel using overwhelming force against unarmed civilians.
Then we saw them completely ignore the UN when they wanted a thorough investigation, now they are treating their strongest allie with utter contempt.
The US will one day say enough is enough, let them sink or swim on there own!
Is this what Israel wants, I don't think so..... 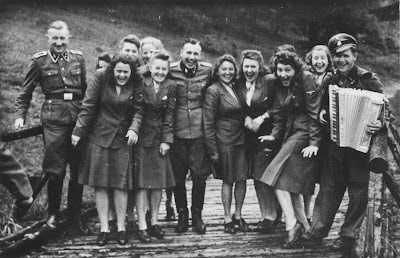 I HOPE THERE IS NOTHING SIMILAR IN THESE PHOTOGRAPHS
at September 29, 2010