Sarah Palin-Quotes
This person could become President of the United States of America
"But obviously, we've got to stand with our North Korean allies." --Sarah Palin, how she would handle the current hostilities between the two Koreas. Nov. 24
"I want to help clean up the state that is so sorry today of journalism. And I have a communications degree." --Sarah Palin, Nov. 22 "Where did she get it"!

"Who hijacked term: 'feminist'? A cackle of rads who want 2 crucify other women with whom they disagree on a singular issue; it's ironic --Sarah Palin, Aug. 18

"As we work and sight see on America's largest island, we'll get to view more majestic bears, so now is a good time to draw attention to the political equivalent of the species." --Sarah Palin, referring to Kodiak Island in Alaska, Hawaii is America's biggest island, 2010

"Ground Zero Mosque supporters: doesn't it stab you in the heart, as it does ours throughout the heartland? Peaceful Muslims, please refudiate." -- Sarah Palin, 2010 "refudiate is not a word"
"We used to hustle over the border for free health care we received in Canada. And I think now, isn't that ironic?" --Sarah Palin, admitting that her family used to get treatment in Canada's single-payer health care system, despite having demonized such government-run programs as socialized medicine that will lead to death-panel-like rationing.
CAN YOU IMAGINE THE DAMAGE SHE COULD DO AS THE LEADER OF THE MOST POWERFUL NATION ON EARTH.
I can imagine her having a conversation along these lines.
"I'm the president and it was silly mistake, no different than burning a cake",it was only a small country.
I just misspelled it, now that it's gone, no big deal, after a while people will forget we nuked it, won't they?
What about Iraq, we made those weapon stories up, so whats so wrong, a small mistake occasionally, it's not so bad. 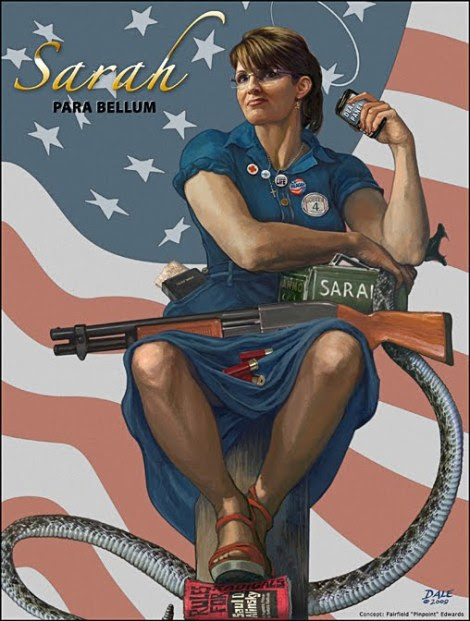