ABBOTT'S WET DREAM--IT CAME TO HIM AT NIGHT, AS ALL WET DREAM DO

Tony Abbott is dreaming, what planet is he on, does he realise what's involved in damming the rivers in Queensland. The area that we are talking about is massive and the country involved is almost flat.

He making a noise as usual, just to get his name in print, there is no logic in his proposal(pipe dream), the experts have long ago dismissed the dam idea as impossible.

If he wants to talk about flood mitigation, by all means do so, but lets not play politics with this flood tragedy.

The dam shown below, the longest in the world would be a toy compared with what would be required in northern Australia and we would require several to have any effect on such a large flood event.

Hirakud Dam India
Location: 15 km to the north of Sambalpur Significance: Longest dam of the world

Situated at a distance of 15 km to the north of Sambalpur, it holds the distinction of being the longest dam of the world. It is a complex structure built across the river Mahanadi and was formed for the purpose of irrigation and flood control.

Hirakund dam is about 4.8 km long, bordered by earthen dykes on its left as well as right. Along with the dykes, the length of the dam increases to 25.8 km.

Even 25.8km would be considered small when talking about what we would require in northern Australia. 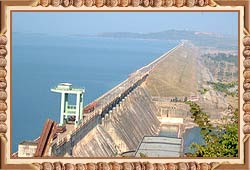