THE NEW KID ON THE BLOCK--MOVE OVER

Some have called 2010 the worst year of U.S./China relations in a decade. It wasn't great for Chinese diplomacy generally or the US.
Many countries are not happy with China's increased influence in the world,however they all realise they had better get used to it.
Chinese President Hu Jintao comes to Washington this week. This is his first visit since 2006, and likely will be his last as he steps down next year.
From the leadership point of view, it's very important, indeed. We're going to see wall-to-wall summit coverage, that's going to happen on television and in the newspapers.
It's very important for President Hu to get the prestige and the face that he will get here at home from standing, shaking hands with President Obama.
The U.S. is recognized as still being the major superpower in the world(for a while yet) and this is symbolic of China's rise as a power.
Ordinary people don't actually care too much. It's amazing. I think they're really too busy either making money or scraping just to get by.
They should take notice, because it's about the changing of the guard and we are not very well informed about China. All the coverage is tainted by bias from all sides.
All we can say, using history as the barometer, is that historically they are not an aggressive nation (accept with Japan), and we must hope that history is not proved wrong.
Will we have aircraft carriers flying the Chinese flag in all the oceans of the world like the US, making the world a safer place for us??.
Who knows, all we can do is keep our fingers crossed and hope for the best. 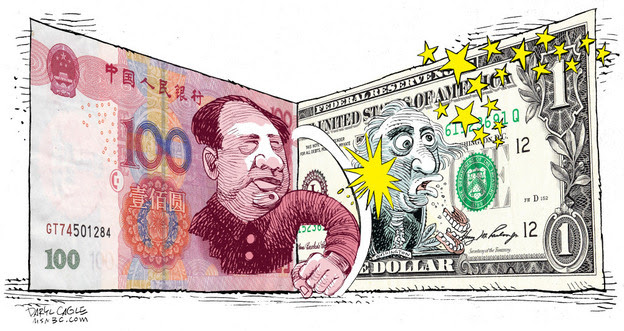 CHINA HAS THE US OVER A BARREL
BECAUSE THEY ARE PAYING IT'S POCKET MONEY
at January 20, 2011