GADDAFI THE "KING RAT" DESCRIBES HIS PEOPLE AS RATS AND COCKROACHES


"This is my country, my country"Gaddafi emphasized over and over.


Not once did he say our country, or the peoples country, he obviously believes it is his personal plaything.


He denounced the protesters as servants of the devil and described the demonstrators as cockroaches.


They were enemies of Libya who deserve to die."capture the rats," he said.


He said he would die as a martyr in the land of his ancestors and fight to the "last drop" of his blood.


He ordering protesters to surrender their weapons immediately, saying there would be a "slaughter" otherwise.


He threatened to purge Libya "house by house" and "inch by inch."


As with most leaders who cling to power for to long, he feels he owns the country and only he knows how to govern.


This is typical of the paranoia that absolute power brings, this man has lost his marbles. 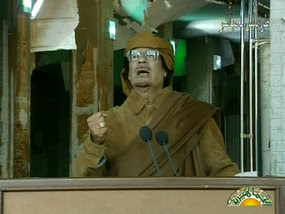