The shop assistants' union's secretary and right-wing powerbroker  Joe De Bruyn faces a rank-and-file challenge to his ban on same-sex marriage.
Joe De Bruyn carries his Catholicism to the extreme by using his union position  to push his strong catholic views.
These views are not shared by his membership,says Duncan Hart
Beginning in Brisbane tonight, Shop Distributive & Allied Employees' Association shop steward Duncan Hart, who works for Target, is organising a revolt against the union's position.
He has called on members of the SDA, Australia's union for retail and fast food workers, to attend the quarterly members' meeting to raise the issue of same-sex marriage.
The move comes after Mr De Bruyn, the SDA's national secretary, said the more Labor "panders" to the Greens, the more it will lose the middle ground.
"There are no votes for Labor in the marginal electorates in the big metropolitan areas on the gay marriage issue," he said.
"We all know that marriage is between a man and a woman."he says.
Mr Hart said the SDA policy was outrageous given the high support for same-sex marriage among retail workers.
He said about 65 per cent of all white-collar workers were in support of gay marriage, this was "even higher for the mostly young members of the union and industry".
De Bruyn has come under scrutiny for voicing his conservative views while being secretary of a trade union and holding a position on the National Executive of the centre-left Australian Labor Party.
He has repeatedly voiced opposition to a woman's right to an abortion, and to legalising same sex marriage. 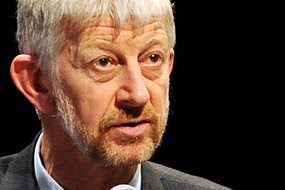 THE FACE OF CATHOLIC
FUNDAMENTALIST
WHO USES HIS UNION POSITION TO PUSH HIS OWN BARROW.
at February 10, 2011