ENGLAND HUMBLED BY THE SHAMROCK SUPERMAN 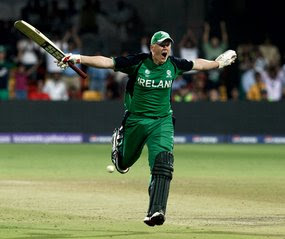 Kevin O'Brien smashed the fastest ever World Cup century to propel Ireland to a stunning three-wicket win over England in a Group B match in Bangalore overnight.
Kevin O'Brien came to the crease and soldiered on, no amount of bowling changes or field placings could stop him and England came loose at the seams with misfields and dropped catches aiding Ireland's chase.
The 26-year-old O'Brien dismantled the English bowling to score 113 runs from 63 balls and his knock helped produce the first upset in this year's showpiece.
By the way this man was dropped from the English team some years ago.....
I believe England has called in councillors to assist the team, they are suffering shock and they are worried about post traumatic stress and it's future effect during this tournament.