FEED THEM CAKE, HE WAS FOILED BY A SPRIGHTLY 88 YEAR OLD WOMAN

A SPRIGHTLY LASS WAS HIS DOWNFALL 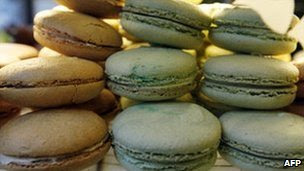 Sedatives were injected into the cakes
Edited by:S W T Read:Feb:4:2011
Police in Paris have arrested a 64-year-old man suspected of burgling up to 20 people, usually after feeding them cakes laced with sedatives.
He was detained soon after his latest alleged burglary on Tuesday, French newspaper Le Parisien reports.
It appears he sought out victims in shops or on the street, striking up an acquaintance, followed by a home visit for coffee and cake.
The victims, aged 75-85, were robbed of cash and credit cards , always acting alone, the burglar is believed to have committed his first such crime in May 2008, when a bottle of drugged wine was employed.
A woman of 88 who was targeted in September 2009, she smelt a rat, only pretending to eat the cake,  she dropped it in a bin when her gentleman caller went to use the toilet.
Feigning to fall asleep, she watched as he began searching the flat.
Challenging the burglar, she made him leave.
Take note "Not all elderly people have lost their marbles"