POLITICIANS WITH CONVICTION---IS THIS A COMPLETE CONTRADICTION

Conviction politicians are hard to find in Australia these days.
By Barrie Cassidy: Edited by : S W T Read : March:25: 8.42am
The then Liberal Party federal director, Lynton Crosby, said his research ten years ago turned up two genuine conviction politicians - John Howard and Bob Brown.(we could doubt his conclusions)
Today, the leaders of the two major parties - Julia Gillard and Tony Abbott - are constantly wrestling with the concept, confusing the public about their positions on key policies.
Julia Gillard and Tony Abbott have both had trouble with climate change policy, both have had changed their minds on the issue several times.
If Tony Abbott's recent actions are anything to go by, Abbott feels he needs a boost to his "direct action" policy on climate change.
He recently sat down with former leader Malcolm Turnbull and asked him whether he would now embrace the Coalition's policy. Turnbull said he could not.
Abbott then tried to persuade him to at least soften his stance, again Turnbull refused telling Abbott that he had to understand he felt absolutely committed to his position.
The conversation is evidence that if Turnbull is intent on one day again leading the Liberal Party, it will be on his terms.
He refused to give an inch when his leadership was challenged, and as a result, he went down by one vote and that was because one member was unavailable.
Had he offered the party just a semblance of compromise, he probably would have survived. And still he remains true to his convictions.
If Lynton Crosby was to update his research after 10 years, whose name do you think would now emerge as a genuine conviction politician? But the Coalition is unlikely to ask the question for fear they may not like the answer. 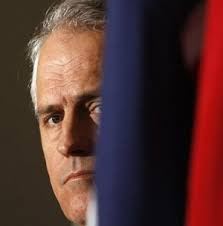 THERE A MAN WITH CONVICTION BEHIND THIS CURTAIN
WE THINK SO ANYWAY
BUT HE IS A POLITICIAN???
at March 25, 2011