A desperate Turkish man living in Germany has turned to the police for protection from his insatiable wife's constant demands for sex, authorities said on Wednesday.
The man came to his local police station in south-western Germany on Tuesday saying that he had been sleeping on the sofa for the past four years to escape the clutches of his wife of 18 years and mother of their two children.
"Now he has decided to get a divorce and to move out ... in the hope of finally getting some rest, particularly as he is anxious to arrive at work well rested," police said in a statement.
Advertisement: Story continues below
"At the moment this is impossible because he says his wife keeps coming into the living room demanding that he perform his marital duties.
"He asked for police help in getting some sleep at night."
Most men would know that this is normal behaviour, or would they?
Imagine if all men had to put up with such actions by the wife, what would we have to complain about, no headaches, no complaints from the wife, what would we have to complain about, life would be boring, or would it?
This guy should seek help, because he obviously has a mental problem!
Mind you this could be detrimental to mans health, what a worrying time for us men let's hope it is not catching.... 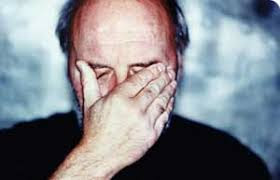