THE WEDDING NIGHT--KATE AND WILLIAM 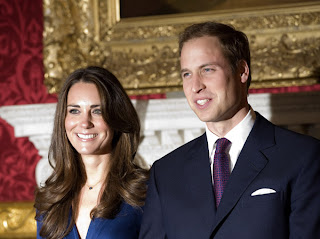 A glimpse into the future April 29 , 2011....
On the day of the Royal wedding, Kate was getting dressed, surrounded by all of her family. She suddenly realized she had forgotten to get shoes. Drama!

Then her sister remembered that she had a pair of white shoes from her wedding so she lent them to Kate for the day. Unfortunately, they were a bit too small and by the time the festivities were over, Kate's feet were hurting real bad.

When she and William withdrew to their room, the only thing she could think of was getting her shoes off.

The rest of the family crowded around the door of the bedroom and they heard roughly what they expected; grunts, straining noises and the occasional muffled scream. Eventually they heard William say, "God, that was tight."

"There," whispered the Queen. "I told you she was a virgin."

Then, to their surprise, they heard William say, "Right. Now for the other one." Followed by more grunting and straining and at last William said, "My God. That was even tighter."