GNOMES, A GERMAN INVENTION OFTEN FORGOTTEN BY THE ENGLISH

THEIR HERITAGE HAS BEEN SERIOUSLY IGNORED
THE GNOME HAS BEEN ADOPTED AS BRITISH WITH EARNEST!

Often the subject of childish practical jokes, gnomes are one of the most frequently stolen items from British gardens.


They are usually the victims of kidnap by shady terrorist groups.


Some say that garden gnomes do possess mystical powers.


Others claim that it is very bad luck to smash up your neighbour's gnomes with a cricket bat, you could be cursed for life.


They are usually the victims of kidnap by shady groups such as the Gnome Liberation Front. 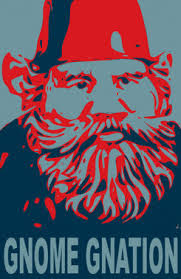