Private schools teaching golf, beagling and pheasant shooting should not be  subsidised by the taxpayer, a court heard yesterday.

Leading educationalists and lawyers yesterday waded into a legal battle between  the Charity Commission and the Independent Schools Council (ISC), which  represents 1,260 top fee paying schools.
The UK Charity Commission has threatened to remove the charitable status of  independent schools unless they increase the number of bursaries offered to  local disadvantaged pupils. 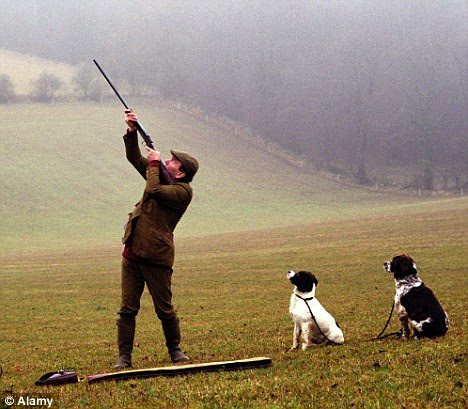 Preserve of the rich: Professor Ron Glatter said the public would be surprised by the activities on offer at schools claiming to be charities, which include pheasant-shooting (posed by model)
But the Independent Schools Council argues many schools will be forced to close if they increase bursaries because the age of austerity has led many into financial strife.
A tribunal into the matter was told of the sector’s excesses and said it was a  preserve of the super rich and should not enjoy tax breaks.
Professor Ron Glatter, of the Education Review Group, said: ‘The law has just  not kept pace. Fees of up to £29,000($64,000 AUD) per year for just one pupil mean that such education is the preserve of the super rich.
The upper crust is assured of survival while schools take money meant for the needy.