ISRAEL LIVING IN THE DARK AGES--Radical Jerusalem rabbinical court-"DOG TO BE STONED TO DEATH" by children.


A Jerusalem rabbinical court condemned to death by stoning a dog it suspects is the reincarnation of a secular lawyer who insulted the court's judges 20 years ago, Ynet website reported on Friday

According to Ynet, the large dog made its way into the Monetary Affairs Court in the ultra-Orthodox Jewish neighbourhood of Mea Shearim in Jerusalem, frightening judges and plaintiffs.
Despite attempts to drive the dog out of the court, the hound refused to leave the premises.
.

One of the sitting judges then recalled a curse the court had passed down upon a secular lawyer who had insulted the judges two decades previously."Reincarnation"
Their preferred divine retribution was for the lawyer's spirit to move into the body of a dog, an animal considered impure by traditional Judaism.
Clearly still offended, one of the judges sentenced the animal to death by stoning by local children.
"It was ordered ... as an appropriate way to 'get back at' the spirit which entered the poor dog," the paper reported the manager as saying, according to Ynet. 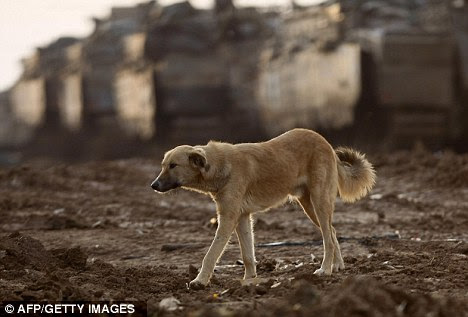 Reincarnation? The court in Jerusalem allegedly sentenced a dog like this one, pictured in the Gaza strip, to death by stoning