NEWS--WIVES GRUMPY WITH HUSBAND IF THEY DON'T GET GOOD NIGHTS SLEEP---SURPRISE!!! SURPRISE!!!

"WASTED RESEARCH"
TELL US SOMETHING WE DIDN'T KNOW!!!

Here’s some breaking news: A study by researchers at the University of Pittsburgh’s Sleep Medicine Institute has found that wives can be grumpy with their husbands if they don't get a good night’s sleep.

Perhaps future research can determine whether husbands tend to hog the covers, whether the other side of the pillow is in fact cooler or whether the setting sun has some effect on darkness.

The researchers likely could have made the same discovery by simply talking to anyone who has ever been married. But they took a more scientific approach.


They equipped 32 couples (average age, early 30s) with sensors that tracked their sleep patterns for 10 nights. And each day, they surveyed the husbands and wives to see how they were getting along. 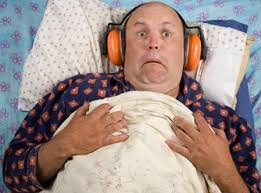