RELIGIOUS
VIENNA, Austria
Niko Alm wanted to test an Austrian law saying that a picture with head coverings would only be allowed in official documents for religious reasons.
So the tongue-in-cheek atheist applied for a new driver's license in his country with a photo of himself wearing a pasta strainer as headgear.
Alm said he was a "pastafarian" and that the headpiece was required by his religion.
The application process took three years.
Alm said Thursday that he's now got his new license.
Police officials in the mostly Catholic country did not sound amused.
They said religion was never an issue in Alm's case, and that he succeeded because he fulfilled the only criterion required: leaving his face fully visible in the photo. 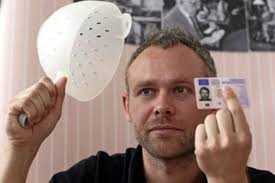