CONGRATULATIONS YOU'RE PREGNANT "JOHN OLD BUDDY" WHAT WERE YOU HOPING FOR?

John Berry is the first to admit he enjoys a beer or two.
Never in his life did he think he'd be mistaken for a pregnant woman, let alone by one of Melbourne's major health services.
The 180-centimetre tall, 90-kilogram man was a little bemused this week when he opened a letter from Sunshine Hospital congratulating him on choosing to have his baby with Western Health.
Advertisement: Story continues below
The letter, addressed to Mr John Berry and containing his individual identification number, urged him to contact the health service if he had any concerns about his impending delivery.
Mr Berry, who originally sought treatment for his hand, said he nearly "hit the floor" when he read the letter.
His mates were all now debating whether they should throw a pink or blue-themed baby shower.
That a man could receive such a ridiculous letter was a sign that Victoria's health system was "up the creek", Mr Berry said.
"I'm concerned now if I go in and have my hand fixed I might come out with no foot."
Lorraine also received a similar letter inviting her to attend child birth education classes. She's 70 and had gone to the hospital for a knee replacement.
"They think I'm pregnant too and I'm 70 years of age." 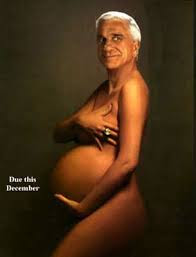 THIS COULD BE YOU