FIVE Merseyside Police Matrix officers were sacked on the spot by a disciplinary panel after taking mobile phone pictures of themselves fooling around inside a house they were supposed to be searching.
The ECHO revealed in May how eight Matrix officers were suspended from duty after the pictures came to light during an investigation into the actions of other members of the crack anti-gun anti-gang unit.
And after a three-month internal inquiry, which has already seen one sergeant sacked, the five constables caught on camera were given their marching orders yesterday.
The hearing headed by senior officers dismissed all five, without notice, having found them guilty of gross misconduct.
An investigation by the Professional Standards Department uncovered the incriminating photos as they probed separate allegations that some Matrix officers had been taking items from raided homes and putting them up for sale on internet auction site eBay.
Three officers, including the now-sacked Sgt Charlie Tennant, 43, were suspended over those allegations.
Tennant, who had 23 years police service, was also embroiled in the mobile phone scandal.
Now those with him in the pictures are also looking for new employment.
Two senior officers within Matrix were also suspended as part of the probe for failing to supervise the search team properly 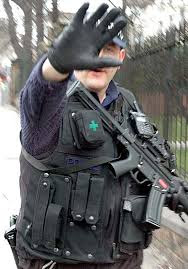 GREED NOT HONOUR
AND


WE TRUST THESE GUYS WITH GUNS