The officials went on an undercover operation to break a ring of alleged crooks - who are thought to be two Bulgarian men and a former Greek wrestling champion - who were using violence to corner the market for the calorific treats in a resort on Paliouri beach in the Halkidiki peninsula near Thessaloniki.

Police revealed an undercover officer posed as a doughnut seller and was attacked by the trio, who have since been charged with blackmail and fraud.

Apparently they were intending to hijack all doughnuts being transported in the area, and then to remove the holes.


Then they intended to sell the holes to the shopkeepers at exorbitant prices.


They struck problems when they found it difficult to store the holes, and they lost a considerable amount of their loot.


Where they eventually stored it the police are unsure, they are bringing in sniffer dogs and hope to get a result soon. 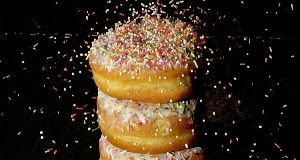 HAVE SEEN ANY OF THESE HOLES