AMERICA CAUGHT BY THE SHORT AND CURLY'S AGAIN...BY, ISRAEL LAUGHING ALL THE WAY TO THE BUILDING SITE...AGAIN!

ISRAEL DOES NOT CARE THAT THEY ARE BECOMING THE BULLIES OF MODERN TIMES
WHO WOULD HAVE BELIEVED THESE PEOPLE OF ALL PEOPLE WOULD BEHAVE IN SUCH A WAY.


Israel approved a plan to build 1,100 housing units in a section of Jerusalem claimed by the Palestinians, deliberately complicating efforts to persuade Palestinian President Mahmoud Abbas to resume peace talks instead of pursuing a vote at the United Nations.
The move comes days after Mr. Abbas asked for a U.N. Security Council vote to gain full membership in the global body.
This was opposed by the U.S. and Israel as usual, it appears that the US of A doesn't care what the Arab world thinks.
I would love to know what the Israeli's hold over America's head that allows them to dictate what the US of A's policy will be, even though logic would suggest that an end to this conflict would benefit America's future in the region.
The U.S. and other members of the so-called Quartet of the international peace process—the U.S., European Union, the U.N. and Russia—criticized the move, because it appears to be provoking the Palestinians deliberately.
The Palestinians, who are already balking at negotiations with Israeli Prime Minister Benjamin Netanyahu, will be even less likely to join after the building announcement.
U.S. Secretary of State Hillary Clinton called the move "counterproductive" in a statement and the U.N. said the building plan "sends the wrong signal'' on peace talks.
America talks the talk but when it comes to a vote they will say what they are told, by Israel, once again.
The building plans in Gilo are "nothing new" and continues four-decade old Israeli policies to build up Jerusalem and surround it with Jewish enclaves as a way to solidify its control, this flies in the face of a UN resolution.
Israel annexed East Jerusalem and portions of the West Bank to its capital after capturing the territories in the 1967 Arab Israeli war.

"We plan in Jerusalem, and we build in Jerusalem. Period,'' said Mr. Netanyahu
This attitude along with the US of A's support will ensure that this conflict continues for years.
It will also ensure that the Arab world are fed more ammunition for hatred of the USA, why hatred, because they see the USA as a puppet whose string are pulled by Israel. 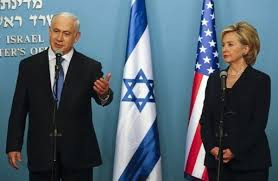 SO I SAID,
"HILLARY YOU JUST STAND THERE AND BE QUIET
AND SURE ENOUGH SHE DID AS SHE WAS TOLD"
JUST LIKE CLINTON, BUSH AND OBAMA
WE HAVE A GREAT RELATIONSHIP
at September 28, 2011