THE COLLINGWOOD NEANDERTHALS ARE HERE AGAIN..IS THIS A JOKE!!

YES IN THE STATE OF Victoria Apparently they have found a group of young men who all show a genetic connection with the lost connection to humans.


They must be from the same stock as they appear to have a liking for Magpies which we all know is a very rare species.


Indeed this group seemed to have a strange power, they attract people of this century in a strange way, it's as if they loose control of their senses, it only seems to happen at the same time of year.


This is understood to be derived from something in the distant past, there is a very ancient myth about them winning some sort of competition in years gone by.


Most Archaeologists beleive that it is only a myth, in fact some can't even except that they may have been capable of winning anything, I must say I agree with this theory. 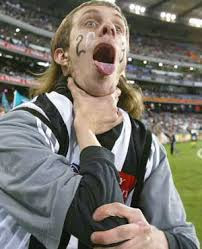