A man known in Arkansas as the "Toe Suck Fairy" for a series of 1990s assaults directed at women's feet was charged with a new round of incidents more than a decade later, police said on Monday.
Michael Robert Wyatt, 50, was arrested on Monday after two women identified him from a photo line-up as "the man who approached them in local stores commenting on their feet and asking to suck their toes, said LaTresha Woodruff, spokeswoman for the Conway Police Department.
Wyatt was charged with two counts of misdemeanor harassment, Woodruff said.
Advertisement: Story continues below
Two women reported that in recent weeks, they were shopping in stores when a man approached them and started talking to them about their toes and asking to suck them.
One woman described the man as having "really messed up toes."
Their reports came after an 83-year-old woman called police on September 10 and told them she was sitting in a chair in front of her apartment when a man approached her.
He took off one of her shoes and began sucking her toes, police said.
After her account was reported by the media, the two other women came forward. 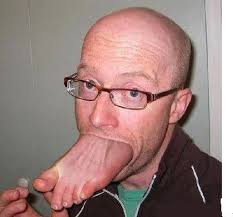 IS THIS A FEETISH?

Email ThisBlogThis!Share to TwitterShare to FacebookShare to Pinterest
Labels: Sick