BULGARIANS FIND AN HONEST POLITICIAN "This isn't a Donkey Vote"

HAVE THE BULGARIANS FOUND
THE ANSWER
A Bulgarian political party has entered a donkey to run for mayor in the country's elections.

The Society for New Bulgaria chose the animal, called Marko, as a candidate for the position in the town of Varna because he "doesn't steal" or "lie".
Angel Dyankov, head of the campaign headquarters of the Society for New Bulgaria party, said: "Unlike the other mayor candidates and politicians, the Donkey has a strong character, doesn't steal, doesn't lie, and gets work done."

He is set to stand for the role of mayor at the October 23 elections. 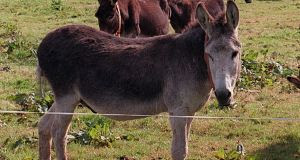 IS THIS THE FUTURE OF POLITICS?
HE TICKS ALL THE BOXES!
Don't laugh do you know anyone that matches his credentials.