WE FUNDED SCIENTISTS TO TEST THIS THEORY!!


Mind-blowing sex warning: Over-exertion between the sheets can wipe your memory

Sex can be mind-blowing – but not always in a good way, as scientists have found it can wipe your memory.

They cite the case of a 54-year-old woman who arrived at a hospital in Washington DC in a state of panic because she’d just been intimate with her husband and immediately lost all recollection of the previous 24 hours.

This rare condition is called ‘transient global amnesia’ and is always temporary, but because it’s so severe, it can be very distressing, say researchers.
The brain doesn’t suffer any harm, though, according to one neurologist not involved in the case. Indeed, brains scans of the woman at Georgetown University Hospital showed no damage had occurred.

Very little is known about what triggers the condition, though some doctors believe that misfiring valves in the neck may be the cause.

Instead of closing shut, they are remaining open to allow pressure in the stomach to push oxygen-poor blood that should be seeping downwards to the heart, back up through the jugular veins and in to the part of the brain that controls memories.
And it’s the older generation, those in their 50s and 60s, who are most at risk. 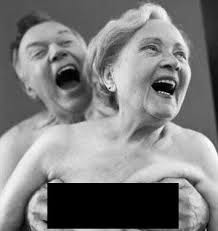 DON'T LET THIS HAPPEN TO YOU??