Tony Abbott once again says no, only this time he shows us he doesn't care about problem gamblers, why because there may be a vote or two in it.


The fact that this is might help people, even though its not a magic bullet does not enter his mind, he says he does not like the nanny state inter fearing in peoples lives.


As usual this is rubbish, Tony Abbott backed the previous governments intervention into indigenous peoples lives vigorously, yet because the polls show he get some votes out of this issue he has turned tail.


The other reason for this decision is to wedge the Wilkie, Gillard agreement, hoping to bring down the government,


Tony Abbott and the Coalition are interested in power and nothing else, they have not once shown us that they are likely to be progressive in any way whatsoever.


If this is the alternative government we are in for a very bleak future.


Talk about throwing the baby out with the bath water, he has thrown the bath away too.


The clubs figures are rubbery at best, they have inflated their potential losses exponentially. 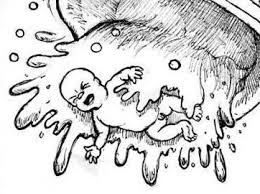 OUT WITH THE BATH, BABY AND ALL