DO THE BANKS HAVE
DOUBLE STANDARDS
THE banks and the credit card company Visa have warned the federal government that any attempt to use the payments system to clamp down on Internet gambling would be unworkable.
They are worried that trying to block payments made to Internet gambling websites could also interfere with online shopping.
Banks aren't saying how much they make from these transactions
How come blocking payments to Wikileaks didn't cause trouble, it was not even mentioned, perhaps because they were a potential threat and able to cause trouble for banks.
It didn't disrupt anyone else using the system then, so why would it now.
The chief executive of the Australian Bankers' Association, Steven Munchenberg, warned the joint select committee on gambling reform that trying to restrict transactions was ''not straightforward''.
Advertisement: Story continues below
The committee is investigating a bill introduced by the independent Senator Nick Xenophon to restrict financial transactions on prohibited illegal Internet gambling sites.
Do banks really care where the money comes from, no not on your "Nelly", they charge huge fees for moving money around. 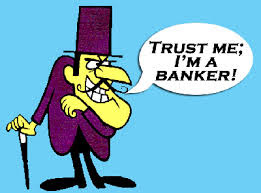