Residents with a valid permit are allowed to carry concealed handguns, electric weapons such as stun guns or tasers, knives other than switchblades, and billy clubs.
Progressive? New Law!
Wow ain't the US of A great.
MILWAUKEE (Reuters)- Roman Catholic bishops in Wisconsin are urging their parishioners not to bring weapons to church now that a new law permits state residents to carry concealed firearms.
"Intuitively, we understand that acts of violence, destruction, and murder are antithetical to the message and person of Jesus Christ and have no rightful place in our society, especially sacred places," the bishops said just before the law went into effect on Tuesday.
"We ask that all people seriously consider not carrying weapons into church buildings as a sign of reverence for these sacred spaces," they said.
The statement, issued by Milwaukee Archbishop Jerome Listecki and four other bishops, said a decision on whether to ban weapons was up to individual churches.
Machine guns, short-barreled rifles and short-barreled shotguns remain prohibited.
An employer may bar an employee from carrying concealed weapons at work, but cannot prohibit an employee from keeping concealed weapons in the employee's vehicle, even if it is parked on employer property.
The law mandates four hours of instructor-led training to carry a concealed weapon, or completion of a hunter safety course through the state. Four hours, are they joking!
Copyright 2011 Thomson Reuters. 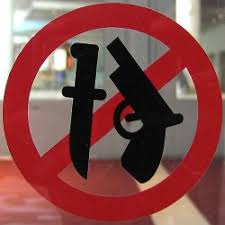 NOT IN MY CHURCH BUDDY!!