A WASTE OF SPACE--Silvio Berlusconi vows to resign--THE SPACE LEFT BY THE RESIGNATION IS LARGE---Why because of his big head! He has led Italy up the creek for years!

Mr Berlusconi has dominated Italian politics for the last 17 years.
He has survived more than 50 confidence votes, but has recently become mired in a series of legal and sex scandals as well as the political and economic crises.
His leadership has almost destroyed the economy by trying to run the country as his own private business.
His disregard for the law has been a shocking example to the youth of Italy and his behaviour as a leader is not a good example, he has treated his office as his alone, with little regard for the people.
This resignation should be welcomed by the people because Italy has become a joke on the world stage thanks to Berlusconi. 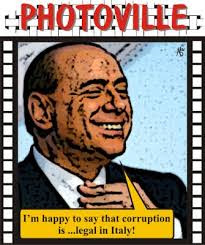