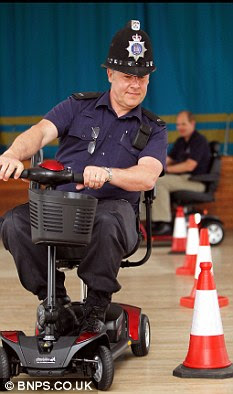 PC Dave Williams tries out the mobility scooter course for himself, in a bid to cut accidents in Christchurch, Dorset.

(Personally this looks kinda cool!  I want one)
They leave bystanders bloodied and bruised after mowing them down as they race through the town.
The culprits?No, Not irresponsible teenagers or daredevil bikers.


They are but pensioners on their mobility scooters!


So bad is the problem of reckless scooting in Christchurch, Dorset, that residents have complained about the way elderly drivers ride their 8mph machines.
One pedestrian was left with a bruised face and cut lip after being knocked down recently.
In response, the police have organised a scooter driver awareness course in the town, where almost a third of the population is of retirement age.

Pensioners are put through their paces on an obstacle course of crossings, traffic lights and cones.
Scooter salesman Mike Ruddick, who helped organise it, said: ‘The people who tend to speed are men, who traditionally go for the bigger scooters.’


I wonder has PC Dave ever been walking with pensioners when a cyclist screams past without sounding a warning, they believe they own the footpath and roads. Dave some training for them might need to happen before pensioners.