Mobile phones are a poison, but don't blame teachers - blame the parents!
This is England, is it any different in Australia?

Holding out my hand I stare into the surly face of a large, angry teenage girl. ‘Give me the phone,’ I say in as calm a voice as I can muster.


Truculently, 15-year-old Lisa glares at me. ‘What phone?’ she asks belligerently as she stuffs it back into her bag.


At this point I have a choice. I can demand that she hand the phone over; she will refuse. I can raise my voice and insist; she’ll swear at me.

I can give her a detention that she won’t turn up to. Or I can decide not to waste any more lesson time and focus on the majority of the class who really want to learn and accept that, once again, a rude, disruptive child has scored a victory.

I make my decision. Turning my back I attempt to salvage some authority by telling Lisa not to let me see her phone again. ‘What phone is that, Miss?’ she sneers. 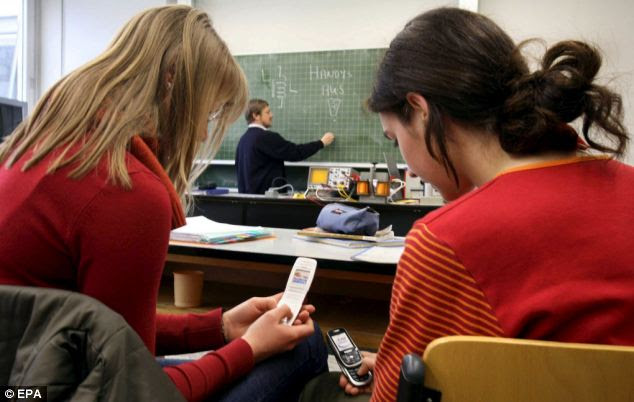 Battle: Teachers are facing a very difficult battle against pupils and parents regarding the intereference of the mobile phone.

Very few teachers, especially female teachers, want to physically grapple a phone from a teenager’s hand. Girls as well as boys are likely to fly off the handle and no teacher wants to provoke a violent confrontation.

What member of staff would want to deal with the outraged parental complaint that would inevitably follow?

Forget the old-fashioned notion that a parent might actually back the teacher and berate their brazen child. As well as out-of-control pupils, the beleaguered teacher of today also has to tackle mums and dads to whom discipline is often a dirty word.