FAT FLYERS TO GET FATTER SEATS...IF SMALLER PASSENGERS HAVE TO GET OUT..TOUGH LUCK...SQUEEZE PAST IF YOU CAN!!

By TOM MCGHIE
PUBLISHED: 21:01 GMT, 16 June 2012 | UPDATED: 21:01 GMT, 16 June 2012
Squeezing into a 'cattle class' airline seat is about to get a  lot easier for the overweight traveller – but at the expense of more slim passengers.
The growing girth of flyers has prompted aircraft manufacturer Airbus to design extra-wide seats for its popular A320 jets.
They will shrink the size of ordinary economy-class seats so that each flight can still carry the same number of people. 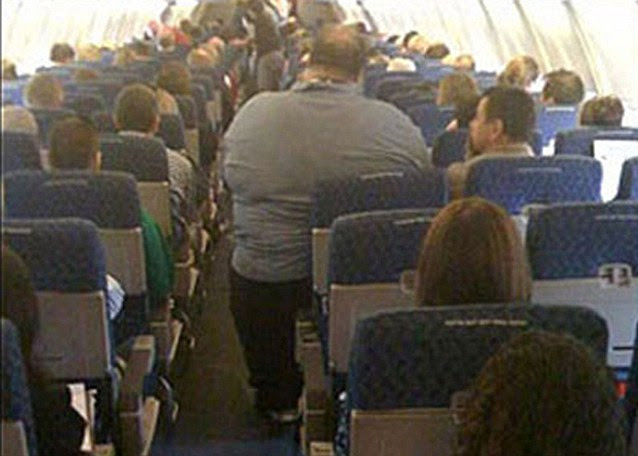 Weighty issue: the passenger who caused problems on an American Airlines flight.
Rather than have rows of three seats, each 18in wide, Airbus proposes making the aisle seat 20in wide and reducing the width of the two others by an inch each.
The new configuration would also allow airlines to impose an extra charge for the premium seats, it is estimated that a £6.50 fee could generate an extra £2 million for each  aircraft over 15 years.
That could help offset the extra fuel cost required to carry overweight passengers.
SMART OR DUMB..SO ALL ISLE SEATS WILL BE FULL OF FAT..GOOD MOVE..SO EVERYONE THAT'S AVERAGE HAS TO SLIP PAST THE LARD.