SAVE THE BUSH...No not the Australian bush, this bush makes a point!


Giving the green finger: Gardener who carved bush into rude gesture ordered to remove it

A gardener who carved a giant bush into a hand displaying a rude gesture has been ordered to remove it after being accused of committing a public order offence.
Richard Jackson has displayed the offending topiary, which shows the middle-finger sign, in his garden for the last eight years.
The 53-year-old has now been told by the council to alter it after a neighbour complained, but he has refused to comply. 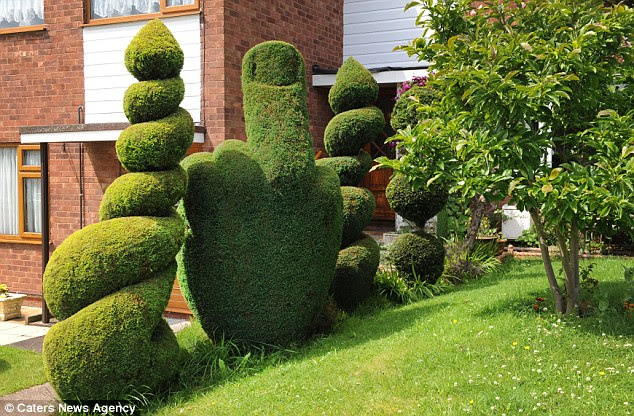 'Public order offence': The council has ordered that this bush carved into the shape of an offensive hand gesture in Richard Jackson's garden be altered after a complaint from a neighbour
Mr Jackson, from Tamworth, Staffordshire, said: 'I was contacted by the police and they said the council had been in touch because somebody had complained to them about it.
'Apparently, one person was offended by it and the police said it was a public order offence.
'I don't intend to change it though - I’m not a trouble maker and I don’t want to offend anyone, but at the same time it’s been here for eight years already and I don’t see why I should have anybody telling me what to change in my garden.'

Mr Jackson says his neighbours are backing his pledge to the keep the shrubbery and have even started a ‘Save the Bush’ campaign.