A Polish coffin company has angered the Catholic church after producing a calendar featuring topless women posing with their caskets.
The marketing ploy features semi-naked women in provocative poses on and next to coffins made by company Lindner.
The Catholic church has condemned the calendar saying human death should be respected and not mixed with sex.

Lindner's coffin calendar, featuring scantily clad women, has angered the Polish Catholic church
One image from the 2013 edition of the calendar sees a young woman with a snake covering her breasts as she reclines on a coffin.
In another, a woman wearing a crimson corset is depicted pulling out the heart of a man lying on a casket.

'My son had the idea of creating the company's calendar so that we could show something half-serious, colorful, beautiful; the beauty of Polish girls and the beauty of our coffins,' said Zbigniew Lindner, the firm's owner.
'We wanted to show that a coffin isn't a religious symbol. Its a product.
'Why are people afraid of coffins and not of business suits, cosmetics or jewelry?' 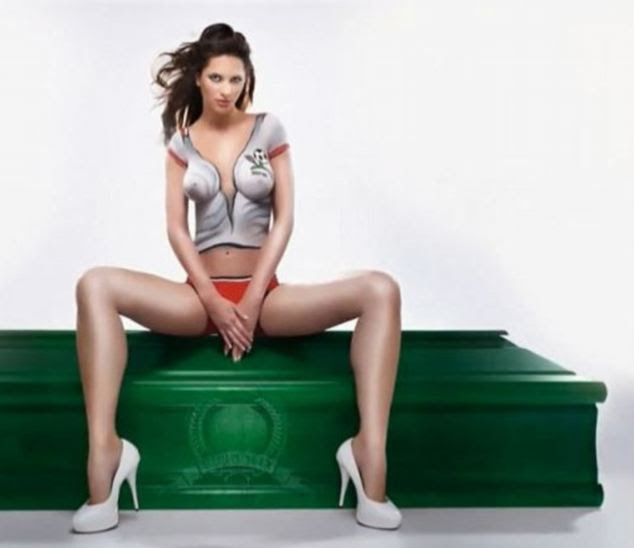 The calendar is for sale on the company's website and each customer receives a complementary key ring in the shape of a coffin.
The Catholic church in Poland has labelled the campaign inappropriate.
A church spokesman has said that human death should be treated with solemnity and not mixed up with sex.
Although 93 per cent of Poles consider themselves Catholic, the proportion who attend church regularly is falling as changes in society are challenging the faith.