I DID NOT MAKE THIS UP!

STOCKHOLM (Reuters) - A woman in Sweden has been charged with engaging in sexual activitieswith a human skeleton and could face jail time for disturbing the peace of the dead, a Swedish prosecutor said.

Police found a full human skeleton, skulls and a box containing other human bones by chance after responding to a call saying a shot had been fired from her flat in the city of Gothenburg.
They also discovered CD-ROMs titled "my necrophilia" and "my first experience", and photographs of the woman engaging in various sexual activities with a skeleton, a court document on the prosecutor's website showed.
It said the woman had handled the bones in a "shameful" and "unethical" manner.
"She is interested in the dead," Prosecutor Kristina Ehrenborg-Staffas told Reuters. "She has pictures of morgues, churches and graveyards."
The 37-year-old unemployed woman has also been accused of selling human bones to an artist in Uppsala in eastern Sweden this past summer.
The woman has said she bought the bones, which were around 50 years old or more and from different parts of the world, over the Internet for historical purposes and says that it is not her in the photographs.
Her trial will take place next week and she faces a maximum two years in prison if found guilty. 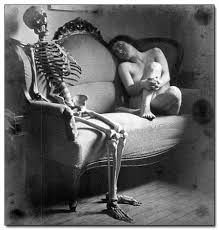