THIS FOX BLEW THE WHISTLE..THANK GOD!

Who prompted this Royal Commission inquiry. 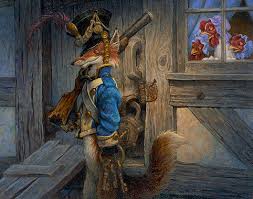 Detective Chief Inspector Peter Fox
Yes it was he who said the NSW enquiry was inadequate.

Inspector Fox had called for a state-wide royal commission into sex abuse and the church, and said the limited special commission  in NSW  focusing on one region was an ''insult''.

He said. ''What the central issue is, it's about the cover-up and the handling within the church.
''If we're going to do it, let's do it properly, these kids and these families deserve much more than that … don't slap them in the face and walk away with a half answer.''

Inspector Fox wrote to Mr O'Farrell on Wednesday night calling on him to establish a royal commission into sexual abuse by priests, warning that the victims are coming forward in ever-increasing numbers.
Inspector Fox's plea for a Royal Commission was ignored.

''I can testify from my own experience that the church covers up, silences victims, hinders police investigations, alerts offenders, destroys evidence and moves priests to protect the good name of the church,'' he wrote.

Detective Inspector Peter Fox should be protected from any repercussions from within the NSW police force and he should be seconded to the Australia wide enquiry.

This guy is a legend, he has put himself out there, put his job on the line, le's make sure he is rewarded, not buried like many whistle blowers in the past.
at November 13, 2012