A woman's work should not be done, its dangerous!

WATCHING TV CAN BE VERY DANGEROUS

This Polish man has burnt the side of his head while doing housework after mistaking the iron for a phone.

Tomasz Paczkowski, from the northern Polish town of Elblag, is now swathed in bandages after his wife asked him to help with the housework while he enjoyed a few days off work.

"My wife had gone to work," the 32-year old told the Polish newspaper Fakt. "After breakfast I started to work.

I turned on the boxing channel on the TV, opened a beer and started ironing.

"I was really getting involved in the boxing and was not really thinking about what I was doing.
Advertisement
"Suddenly the phone rang and I mucked things up.

"Instead of grabbing the receiver I picked up the iron and put it to my ear." Mr Paczkowski said a burning sensation on his ear soon made him realise his mistake.

To compound his misfortune, he hit his head on a door frame while dashing to the bathroom to cool his burn with water. He suffered an injury just above the left eye.

Mr Paczkowski said he would give up watching boxing on the television but would continue to iron.

Tomasz don't do it any more, ironing was never meant to be a real man's job, anyway we all know that women can do more than one job at a time, offer to do the washing or the dish washing, you shouldn't get into trouble.

Then again, with the dish washing you could cause yourself some damage, the washing should be safe, but Mmmmmmm, maybe not.

Well Tomasz the best suggestion I can give you is stick to things that real men were meant to do and leave these type of chores to those that were born do such work. 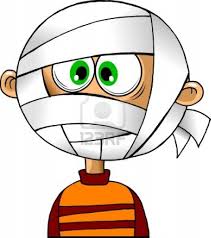