Stop that man Stop I say!

Raymond Garcia was mad and allegedly refused to back down against his adversary — a stop sign in Roswell, N.M.
The alleged altercation happened Friday when officers responded to a report of a man, later identified by cops as Garcia, fighting a stop sign, UPI reported.
Officers said Garcia, 45, appeared to be under the influence of drugs, according to the AP.
But while it appears the alleged war between Garcia and the stop sign came to a draw, Garcia still had some fight left for police, according to authorities.
First, he allegedly reacted belligerently and ran from two officers, who shot him with Taser darts. Garcia continued kicking at the cops as they got closer, police said according to KRQE-TV.
Garcia was darted again, but broke off the Taser leads from his stomach. When one officer tried to use his baton, Garcia got a hold of it and attempted to use it against officers, according to police.
The man who fought a stop sign didn't stop, despite the pepper spray the arresting officers deployed. He simply wiped his face and allegedly continued running while throwing an officer's baton back at him.
"Usually when somebody is tased, their muscles contract and don't allow them to do anything, and that's why you normally see them fall to the ground," Roswell Police Dept. Sabrina Morales told KRQE-TV. "So this person, Garcia, had to be on some sort of drug possibly that was not allowing his system to react normally."
Garcia was finally arrested and charged with aggravated assault against a peace officer, disarming, and resisting officers.
There is no word yet on whether the stop sign will press charges. 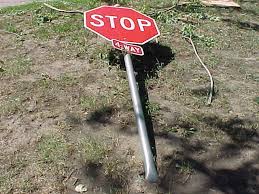