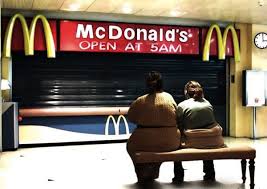 Mc Donald's expansion planned for Glasgow
Manchester has been labelled as Britain’s “most toxic city” in the battle against obesity with the highest number of fast-food outlets per population, according to a survey.

A study  found the city has a takeaway, café or coffee shop for every 492 people

Weight Watchers is Launching its New Approach campaign, which is making members more aware of their environment, and food and drink habits.

This is helping members tackle their toxic environments head-on as members are encouraged to take control of their spaces and make better eating decisions.

“This isn’t about demonising ’bad food’, it’s about being more aware of the choices we make each and every day so that we can begin to make better, healthier choices for our future health.”

After reading this article I'm a little sceptical, is this accurate or just a new advertising campaign by Weight Watchers.

Meanwhile in Glasgow, fast food outlets are loving this, they can see a great opportunity for expansion in more ways than one.
at January 04, 2013