Money for jam. No it's "GARLIC"

THERE'S GOLD IN THAT THERE SMELL 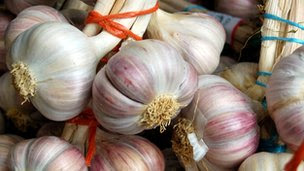 
The European Anti-Fraud Office, launched an investigation in 2010, and their inquiries led to the police capturing a truck containing 28 tonnes of Chinese garlic on the Norwegian-Swedish border in June that year.

They estimated that an estimated 1,200 tonnes of Chinese garlic had been illegally imported into the EU via Norway during the preceding 18 months by a gang of smugglers.

Sweden refused to say whether the arrest warrant for the alleged British garlic smugglers was linked to their earlier inquiry.

This is one of many convictions, last month, a London-based import-export merchant was sentenced to six years imprisonment for smuggling thousands of kilos of Chinese garlic into Britain and dodging an estimated £2 million in import duty. He said it was fresh ginger which is free of duty.

In Ireland, the head of a major fruit and vegetable importing company was jailed for six years in March last year for smuggling into the EU over a thousand tons of Chinese garlic disguised as apples.

Apart from helping to keep Dracula at bay and lining the pockets of vegetable smugglers, garlic possesses countless health benefits. It has long been considered a herbal “wonder drug” with a reputation in folklore for preventing everything from the common cold to cancer.

It's apparent garlic smuggling is both very lucrative and healthy, although if your given away by the smell, and caught, then you may think twice about smuggling something that smells quite as strong next time.

In days gone by garlic was even used to help ward off the plague however its obvious that it does not ward of the authorities in 2013.
at January 13, 2013