THE AUSTRALIAN 12 COMMANDMENTS
(ACCORDING TO ABBOTT)


8  NO one else shall steal the leadership except me, one vote is enough!
9  NO, you thou shall not bear false witness unless you can hurt the government
10 Thou shall not covet any position, NO, only that of the Prime Minister
11 Thou shall not believe in Global warming, NO never,  unless temperatures are above 50c
12 Thou shall believe you are in the only party that is truly born to rule, NO one else


"During the three-way Liberal leadership contest between Malcolm Turnbull, Joe Hockey and Tony Abbott, all three men consulted with Jesuit priests." (according to The Australian)

By the way, the Vatican has more in common with totalitarianism than democracy because of its own political nature and structure, since the Pope is regarded as being infallible like a supreme dictator.(Perhaps Tony Abbott has similar traits for as of today he has never admitted being wrong) 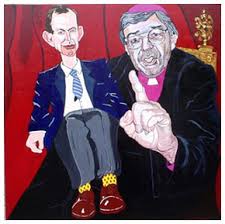