News Flash: ALL REAL MEN NEW THIS ALREADY. "My dad warned me about housework before my first marriage!"

More sex if MEN DO THIS

The relationship between sex, marriage and gender roles is so complex that unravelling it makes the work of the Large Hadron Collider look like play school.

Psychologists and sociologists have argued for decades about what makes humans want to have sex, when to have it, with whom and how often.

Now new research seems to confound modern thinking by "discovering" that men who want a great sex life should confine their domestic chores to mending the family car.

Women, meanwhile, may state a desire for a New Man but in reality all they want is to be dragged, simpering, by the hair into the nearest cave.

According to Sabino Kornrich, a sociologist at the Juan March Institute in Madrid, couples who maintain traditional gender roles have sex on average 1.6 times more frequently than those whose ’’core’’ housework (defined as cooking, cleaning and doing the laundry) is shared equally.

This contradicts other recent studies which suggest men can ’’trade’’ extra work in the home and expect more sex as ’’payment’’.

So if anyone is wondering whether they might improve their sex lives by changing the type of housework they do, there are probably a hundred other things they should try first. 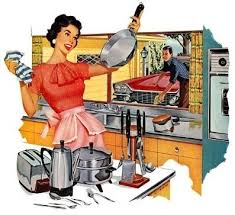 LET HER DO IT!
Sabino Kornrich  of Juan March Institute in Madrid IS NOW MY IDOL
what a brilliant mind. "My dad was right"
Proof at last!