Had an ENEMA..Ever felt like you've had the same feeling! 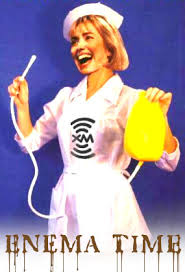 
Doctor gets stabbed for administering enema


A doctor working at a Sanand hospital had to face the wrath of a woman, who misunderstood the treatment prescribed to her. He suffered serious injuries after being assaulted by the patient’s brother and his accomplices.
The incident happened at Shreeji Hospital, where Dipika went for treatment after suffering from severe constipation. After examining her, Dr Divyesh Teraiyya asked his staff to administer enema to the patient to relieve her of the pain.
Following the procedure, instead of feeling relieved, the patient assumed that she was sodomised and felt humiliated.
She rushed home to tell her brother Rinku Vaghela about the incident, who gathered his friends and went to confront the doctor. The altercation escalated to the point where they stabbed the doctor in his cheek and beat him up with pipes and sticks.
Sanand police have registered a complaint against Vaghela and his accomplices, who have absconded.
at March 15, 2013