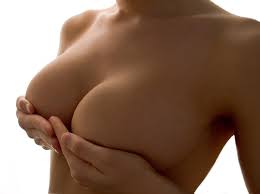 A WOMAN has appeared in court accused of trying to suffocate her boyfriend with her breasts.
Karin Hoffer is accused of forcing her boyfriend's head into her breasts as they made love.
A court heard that Andreas Koller struggled to breathe as he was attacked during sex.
Prosecutors say when he finally broke free from her dangerous weapons, otherwise known as breasts, (it is not known if this was the first time a similar attack had occurred). Karin, 33, then tried to strangle him with her hands.
She was charged with GBH after the alleged attack in Unna, Germany.
Judges suspended the case when defence lawyers told the court that the accused had suffered uplift problems before and now suffered “psychological trauma” and was unfit to stand trial.
Andreas Koller told the court: “I really did love her with all my heart."
He added: "What she needs is not a sentence, but proper psychiatric therapy.”
It is expected the defence team will bring expert witnesses who have all suffered similar experiences while making love, they will tell the court that it is often the case that when a woman is not satisfied she can react aggressively.
One suggestion is that Mr Hoffer may require sex therapy to improve his prowess which may avoid a similar thing happening to him in the future.