I've always got your back Minister 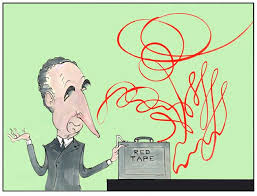 EXAMPLE: BASED ON FACT


Ministers don't run their departments......the public servants do.  "Yes Minister" was a program developed after years of research, this is how it works:

Minister: Secretary, do you think it is a good idea to issue a statement?

Secretary: Well, Minister, in practical terms we have the usual six options:

One: do nothing.
Two: issue a statement deploring the idea.
Three: lodge an alternative proposal which is dangerous, they may hold us to it.
Four: cut off aid.
Five: break off diplomatic relations.
And six: declare war.

Minister: Which one should it be?

Secretary:
Well, if we do nothing, that means we don't disagree or agree with the proposal.
If we issue a statement, we'll just look foolish and if we lodge a protest, it'll be ignored.
We can't cut off aid, because we don't give them any.
If we break off diplomatic relations, then we can't negotiate the oil contracts.
And if we declare war, well it might just look as though we were over-reacting!

Get it Minister!!!!!!! The best thing is to do is nothing, we'll look after everything, leave it to us that's what we're here for.
Minister we've seen all this before, Ministers and governments come and go, but we go on for ever. Don't you worry about a thing!

THIS COULD BE ANYWHERE
Frightening, no reassuring.