AUSTRALIA UNDER ABBOTT
TAKE A LOOK AT THE FUTURE!

This is what Tony Abbott's Audit commission would look at:

One of its simplest suggestions will be to stop increasing the pension. It is traditionally raised twice a year by either enough to keep it at the male earnings benchmark or by the increase in consumer prices, whichever is the greatest.

The commission would suggest instead of automatically adjusting it, a review should be undertaken only from time to time, they would then have to consider ''all relevant circumstances, including budget pressures''.Pensioners should be shaking in their boots.

Another area were they would suggest savings is that some Commonwealth operations would be surrendered to the states.

Health and aged care should be shifted. The states run the hospitals and their governments know the most about the quality of their aged care services.The states were so bad in aged care the Commonwealth had to set new guidelines.

Before surrendering aged care to the states the Commonwealth would de-fund the institutions, fund the users instead and jack up the users' own (means-tested) contribution.
If the aged got a raw deal they could blame the states.

Medicare and the pharmaceutical benefits scheme, should be more stingy, requiring all but the poorest to pay more to see the doctor and to pay more for prescriptions.

Responsibility for education would go to the states, along with childcare.Setting national standards would be scrapped in favour of a mish mash of state standards.

The exception would be tertiary education where the Commonwealth would be notionally in charge, but would be hands-off, funding the students rather than the institutions.

It would hand out a limited number of scholarships to year 12 students each year ''redeemable at any accredited institution''.

The staff savings in the departments of health, education and environment (which would also go to the states) would be enormous. Having national targets and guidelines for the environment and health would be a thing of the past, the rules will be different from state to state.
This would be step back in time for developers!

Targeted departments would be required to cut their running costs by at least 20 per cent over three years.

All other departments (including the usually exempt defence department) would be required to cut their costs by 10 per cent.

Would Tony Abbott welcome such a radical set of prescriptions, yes, it is too tempting. Such drastic actions are completely in line with his liberal ideology.

He has already specifically charged the proposed Audit commission with examining questions such as ''whether the federal health department really needs the number of staff they have.

He knows what the Audit commission will examine and he must know what it is likely to recommend. He is preparing to consider bold options.

By the way around the traps he's been wondering why we should have a public broadcaster in this country when we have such a well balanced media. Well balanced, Tony,Tony, Tony what country do you live in mate?
As for Medibank Private, well it makes money, everyone knows governments aren't supposed be in the business of making money, so my bet is it will be on the to sell list.


LOOK BACK AT THE FUTURE 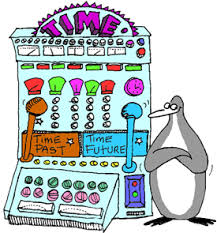