Sulking Abbot like a rabbit that found a bolt hole or has he found the bottle?

By George Negus: Edited by S.w.T.read
IS IT DEBATE OR DIE FOR TONY?

Tony Abbott has been on a great big sulk since September 2010. He has become Mr Rabbit, forever looking for a bolt hole.
Press conferences end abruptly, without fielding questions and he refuses to appear on Q&A on ABC.
It’s time for "Dr No" to say "yes".
Abbott’s point of refusal – that if the prime minister really wanted to debate him, he would call the election date or recall parliament, it’s a stunt.

We get that.
Who cares? Tony’s hardly stunt-shy. But here's one thing he should keep in mind: he isn't the only one who might stutter when asked about policy.
Debating Rudd at the National Press Club offers Abbott a golden opportunity to remind Australia of the PM’s penchant for big words.

Rudd might rock around the place from time to time, but behind the lectern, nerdy daggy Dad gives way to prime minister and he's good at it, very good at being a PM.

No one wants nerdy Kevin in his or her lounge room but PM Rudd is a different kettle of fish.

Now I’m told that in person, Abbott is charismatic and whip smart. He could bring that to the Press Club, and leave the dead-eyed circling shark we have seen so often, behind him.
As for Rudd, he says we’ve booked the hall and set a time, be there or be square." 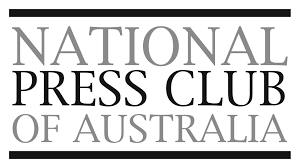 No it’s not. Rudd loses nothing if Abbott is a no show because he’s not the opposition leader.

He’s PM. He won’t talk to an empty lectern he’ll give a speech and take the piss out of Tony, the journo's will laugh and love every minute, and it will all be on TV.


Think of it, the headline  "‘Heavy Kevvy’ Rudd TKO’s ‘No Ticker’ Tony"..
Call his bluff, Tony or you are going to have enough egg over your face to feed the homeless for weeks.
at July 07, 2013