The easel has spoken oh  womb-watchers

Kate, who refused to let her poshness get in the way of a good push, has lost at least eight pounds(new weight watchers diet) No its babyweight this evening.
The royal gynaecologist, a job title which up until recently only existed in our wildest and most depraved of dreams, has brought forth an heir. He is held up to her subjects a la "The Lion King" and we duly frolic and rejoice like the animals that we are.
Yes, to see a girl become heir to the throne following a historic change in legislation would have felt like a victory of sorts, even for those of us who would prefer not to have a monarchy at all.
There are few times one gets to see a woman in power. I for one am glad that it's a boy.
We know from previous experience that royals inevitably grow up as either tabloid fodder (girl) or cannon fodder (boy), although in neither case are we are permitted to see too much of their personal action.
This baby faced an insane amount of scrutiny in utero, including, in a desperate attempt to fill the no news vacuum.
Now god forbid we will be bombarded with pictures and stories about weight gained, hair colour, first words and god knows what.
Where can we hide, nowhere, even wearing a birka will not save us from the dreaded 24 hour news cycle that must be offered up sacrifices to stay alive.
This lad will no doubt quench its thirst for some time to come. 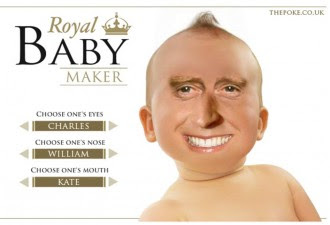