Dog didn't feel it. What a bitch of a story!

THIS IS DOG OF A STORY(SIC)


A Washington State man arrested for allegedly attaching explosives to the family dog and blowing him up won't face animal cruelty charges because the dog didn't suffer, a law enforcement official said.
So the dog didn't suffer, the poor dog is dead and never could talk, this is defence, come on!
Christopher W. Dillingham, 45, of Stevenson, was charged with reckless endangerment and possession of an explosive device after the incident Sunday, according to KATU.
Sheriff's deputies responded to Dillingham's home at about 4 a.m. when neighbors heard an explosion. Body parts of the Labrador Retriever, named Cabella, were found strewn across the yard.
Investigators say Dillingham -- who owns a fireworks stand and has a history of domestic violence -- attached an explosive device to Cabella's neck and detonated it.
Dillingham told deputies that his ex-girlfriend gave him the dog and "put the devil in it."
So he blew it up!!!!! 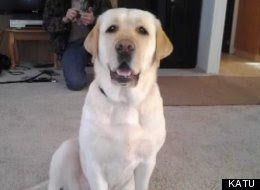