Tony Abbott does a Kevin Rudd, is this an incarnation of sorts.

Kevin, oh no, I mean Tony, gags his ministers.
I thought he told us he's not going to be a one man show?


Tony Abbott, who once described Kevin Rudd as a ''hyper-control freak'' for his autocratic media management, has done a Kevin Rudd and gagged his own ministers from media interviews without prior approval from the Prime Minister's office.

The communications clampdown was issued hours after Education Minister Christopher Pyne dropped a bomb in an interview with Fairfax Media the government's agenda to take an axe to the university sector.

Then there was the Immigration Minister Scott Morrison announcing that asylum seeker boat arrivals would be behind a curtain of censorship.
Mr Abbott already declared he'd ''take politics off the front page''.

Advertisement
Now he appears to be putting his foot down, loose tungues and all that.

Mr Abbott's senior press secretary, James Boyce has now informed ministerial staff that all requests for interviews, right down to ABC local outlets, must be vetted by Kate Walshe who is in charge of communications in Mr Abbott's office.

"All media co-ordination and requests should go through Kate first. This covers all national media interviews on television, radio and print. This includes any ABC local radio or ABC television interviews, the Sunday program, Sky News, and metropolitan print media longer-format interviews, etc,'' he wrote.

"With any regular appearances on shows first having been coordinated through Kate at least the day before." 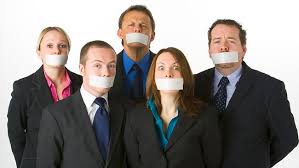 THIS WORKED FOR KEVIN, I DON'T THINK SO!
By the way if Tony starts flicking his hair we'll be worried!